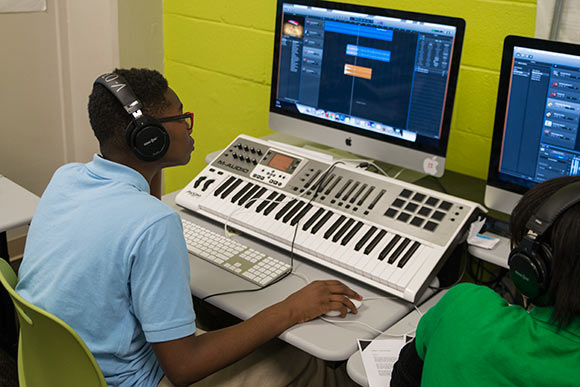 When the Cleveland Metropolitan School District(CMSD) opened the Cleveland High School for Digital Arts in the 2014-15 school year, 15-year-old Marvin Watts took interest. “They told me I could write my own script,” he recalls. “It interested me because the school offers some classes you might not get until you go to college – like film – and I’m very interested in film.”
Not only did Watts get to write his movie script, he was able to direct, edit and turn it into an actual movie by the end of his ninth grade year. This year, as a 10thgrader, Watts is working on a new script while also concentrating on his core classes as part of a college prep curriculum.

The Cleveland High School for Digital Arts is one of three newer high schools in the CMSD, each offering a well-rounded basic education along with special tracks to cater to those students aspiring to go on to college upon graduation, study special interests – like Watts is – and develop critical thinking skills to make an impact in the world.

“The creation of schools like Digital Arts is a major goal of Cleveland’s Plan for Transforming Schools,” says Piet van Lier of the Cleveland Transformation Alliance. Passed by the state legislature in 2012, the Cleveland Plan seeks to provide quality options for all Cleveland children.

Some of the teachers at these schools share their perspectives on what these unique programs offer students in the CMSD.

Marsha Dobrzynski, executive director of the Center for Arts-Inspired Learningand Digital Arts advisory board chair, developed the vision for the school four years ago after watching students at the center creating a digital game about Egypt. What started as a game about modern-day Egypt and the Arab Spring eventually evolved into a game about ancient Egypt after the students began research for the game.

“Watching the way these kids became engaged in these art forms and taking a personal interest in learning I thought ‘why can’t we transfer learning from this program to high school,’” she recalls. “They were taking ownership over learning – researching their own content for the game.”

Dobrzynski researched similar schools around the country and presented her idea to the Gund Foundation and Cleveland Foundation. Both foundations funded the school’s start up and provided funding again this year through the CMSD. The school opened as a CMSD public school at 1440 Lakeside Avenue in July 2014.

“Our goal is to be a college preparatory school that uses digital media to be that hook,” says Dobrzynski. “So many young people need to make it relevant to them. It’s a different way to approach subject matter. They get to understand why they’re working on things too.”

Digital Arts runs on a year-round schedule, with four 10-week sessions and three-week breaks, and the school day spans an extended day schedule – going from 9am to 5:30pm on Mondays, Tuesdays and Thursdays and lets out at 3:30pm on Wednesdays and Fridays. Every student gets laptops that they can take home

The school began with ninth grade students in its inaugural year. This year, tenth grade was added. Eleventh and twelfth grades will be added in each of the next two years. “We have 160 kids this year,” says English teacher Jennifer Poland. “Our goal is 200.”

Poland came to Digital Arts in its first year to teach film and transitioned into English this year. The school’s academic structure is one in which all subjects interrelate to encourage project-based learning. “The students are coming here are choosing to explore the digital arts,” explains Poland. “The core curriculum implements the core subject around the digital arts.”

For instance, last year the students filmed a cooking competition show that incorporated what they were learning about the Revolutionary War in chemistry, math, social studies, English and history. “We used history to research the foods available during the Revolutionary War, using their chemistry knowledge to win extra ingredients and cook the food and writing research papers about the era,” says Poland. The students filmed the whole show, and each student edited his or her own version of the show.

Each school year is based on an “essential question.” This year’s question for ninth graders is “How does change happen?” Students are studying street drugs – the social impact of them in social studies, the chemical reactions on the body in science, and writing research papers on how drug consumption changes behavior and affects society in English.

“The goal is to make them see the relations,” says Poland. “Kids don’t care about research papers, but once you tie it in through their lives, they’re connected.”

Bard High School Early College first opened last year before moving this year to its new home at 13501 Terminal Ave. The school focuses on a liberal arts curriculum. Upon graduation Bard students not only receive their high school diplomas, they also earn an associate in arts degree from Bard College.

The school opened to ninth graders and eleventh graders last year. By the time it reaches full enrollment, Bard will serve grades nine through 12. Eleventh and twelfth graders at Bard are known as “year ones” and “year twos,” respectively, because they are on track at that point to earn their college degrees.

There are currently 260 students, most of them in ninth and tenth grade, and of this year’s twelfth grade class about 18 will graduate with their associate’s degrees in May.

“It’s about access,” says Bard principal Dumaine Williams. “A lot of students don’t necessarily have access to liberal arts and college curriculums in high school.” It also alleviates some of the stress some students feel about paying for college.

That access also means developing a different way of thinking, Williams says. “It teaches critical thinking, providing a voice. It’s taking a look at your work and saying, ‘what do you think?’ It allows you to look at four years of high school productively and get the most out of it.”

Alan Mintz, a working artist with a 26-year record of teaching in CMSD schools and at the college level, teaches art at Bard. “The atmosphere we’re trying to create is that of a college campus, rather than a high school,” he says.

Mintz agrees that Bard teaches high school kids critical thinking skills. “It’s using the process to focus them and help them better understand what they’re learning,” he says. “It’s run very much like a college with seminars and intensive discussions.”

In teaching art, Mintz encourages his students to reflect on what they are doing, rather than just creating a piece of art.

After more than 20 years in teaching, Mintz says he’s happy with the formula at Bard. “I feel very fulfilled as teacher, and I’m working my tail off,” he says.

Bard students must go through an application process to attend the school. They must have a good GPA, write a creative, self-expression essay, interview with a faculty member or admissions counselor and provide a letter of recommendation. But admission is not strictly based on their academic record.

“Basically, what we’re looking for are students who have a strong passion for learning,” says Mintz.

Like Digital Arts, E3agle uses a mastery method to teach college preparatory classes and measure achievement. Rather than assign grades or fail a student who doesn’t complete the coursework satisfactorily, they simply keep at it until they have mastered it.

“We don’t give out Fs or Ds in mastery based learning,” says music teacher Aeneas Alldredge. “We have workshops for whatever they need help with. There’s good research that shows students learn at the mastery level and use it in everyday life. They have greater success.”

Like Bard, the curriculum is designed to encourage critical thinking, active learning and leadership. E3agle also puts a technology spin on learning – every student gets a laptop. Classes are taught in the classroom and through an online curriculum.

“We’re trying to create a better balance of having students on the computer with the online curriculum as well as work in a regular more practical setting,” explains math teacher Louis Durbin, who has been with the school since it started. “The big thing we’re trying to create here is for students to be self-driven and motivated to watch over their own progress.”

Tenth grader Willie Parker, 15, was particularly attracted to the technology angle of E3agle’s model. “I like taking the computer home to work on most of the time,” he says. “I thought E3agle was a good chance for me to try something new.”

Tenth grader Joslainie Gonzales, 15, says she was intimidated by the new model when she enrolled at E3agle last year as a ninth grader. “At first it was a struggle, knowing how to use computers and online learning,” she recalls. “As soon as you get used to it you start catching up. Here, you do more with the computer but also even with the teachers. And it helps me to work at my own pace. If you need help with this, go to a teacher for help.”

Also like Digital Arts, E3agle operates on a year-round schedule of 10 weeks on, three weeks off. Teachers spend one of the off weeks each quarter on professional development.

Despite E3agle’s success, Durbin says they still have a long way to go. “As we’ve been changing students’ mindsets we’re also changing what we see happening in our schools,” he says. “By no means is anyone satisfied. This is a group who care and has high expectations. We’ve made great improvements, but we are nowhere near where we want to be yet.”

These high schools are too new to be rated by the Transformation Alliance, tasked by the state with assessing all public schools in Cleveland on its website and in its printed School Quality Guide.

“New schools like Digital Arts, E3agle, and Bard are very exciting in the context of the Cleveland Plan because they provide new opportunities for Cleveland families, quality options that can help guide students on the path to career and college,” says the Alliance’s van Lier.